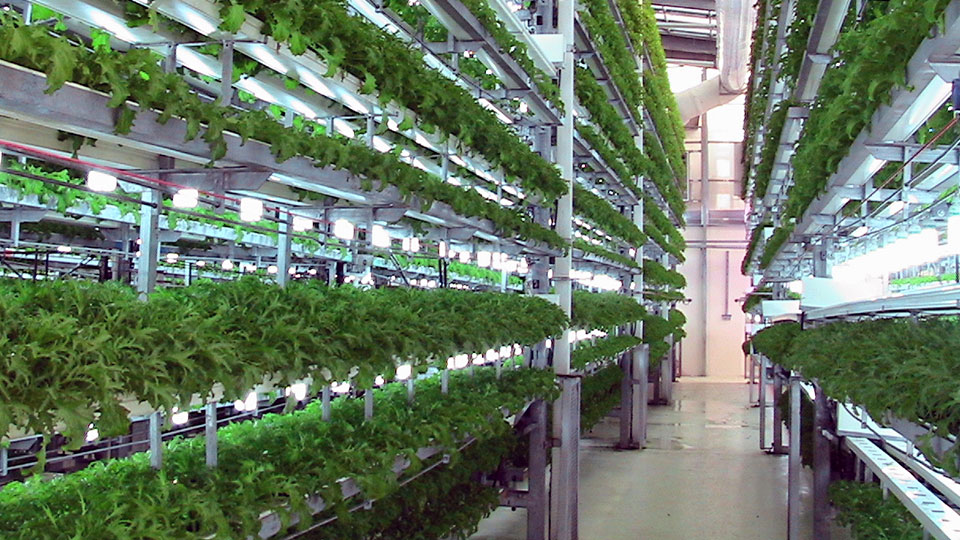 When Plant Roots Get Fed By Nutrients Mists, It’s Called Aeroponics, And It Produces Great Results For High Value Crops

Hydroponics is an indoor gardening system that uses sterile root zone media such as rockwool, coco coir or volcanic rock- instead of soil.
Growers are responsible for feeding all nutrients to plants, because the root zone media contains no nutrients (although some varieties of coco coir or sphagnum moss contain small amounts of nutrients).

Hydroponics systems are more effective than soil systems because roots can more easily and efficiently uptake nutrients from sterile media, and because growers can totally control what ratios and types of nutrients enter the plants.

The next step for growers who want the most efficient hydroponics system is to convert to aeroponics.

In an aeroponics system, plants are grown in troughs, tubes or other types of chambers. Their roots are not in any kind of solid material such as rockwool or soil. Instead, roots hang in space and are periodically bathed in nutrient mist. This means that roots can get larger and more easily absorb nutrients and oxygen. There’s less chance of root zone disease, because there’s no material for debris or pathogens to reside.

A warning is in order, however. Because aeroponics system chambers are constantly wet with nutrient spray, they must be continually treated with 35% hydrogen peroxide solution to prevent the growth of harmful bacteria and fungi.

Aeroponics plants have no root zone media to anchor in, so aeroponics systems have support collars that hold stems in place. These collars are rigid enough to hold plants upright and keep the roots in place, but flexible enough to allow plant growth.

Although most gardeners are unaware of the role that oxygen plays in plant growth, hydroponics scientists have long known that the density of root zone media is a limiting factor on plant growth.

That’s because roots need oxygen, and root zone media surrounds roots to limit the amount of oxygen they can absorb in comparison to how much they can absorb when grown aeroponically. Aeroponics nutrients are misted through oxygen, and there’s plenty of oxygen in the growing chamber for roots to absorb. That’s one reason aeroponics plants grow faster and absorb more nutrients than regular hydroponics plants.

That being said, it would be misleading to give growers the impression that aeroponics systems are easy to set up and run. The increasing popularity of aeroponics has led to a variety of plug and play systems that involve about the same amount of set up as when a grower builds a pump-timer irrigated regular hydroponics system.

Most aeroponics systems include standard features such as a lower chamber/reservoir, upper chamber, pumps, sprayers and neoprene collars. Many aeroponics systems feature continual chambers that run in rows. Others are a “stadium style” system that features a sub-structure that holds a V-shaped growing area with a high intensity light in the middle.

One very important thing to know: any chamber in which roots reside must be opaque. Roots do not like light. They evolved to grow underground.

One company manufactures a rotating aeroponics garden that revolves around a light. The manufacturers brag that plants produce extra resin because the plants are upside down during their rotation around the light.

The range of benefits of aeroponics is large, but one of the most noticeable benefits is in early plants and clones.

As plants mature, aeroponics benefits include efficient use of fertilizer and more floral growth. Aeroponics plants can produce more flowers with less above-ground growth. They can be easily moved around in the aeroponics system, which is basically a modular system in which plants can be removed from one neoprene collar and placed in another.

It’s important to use superior fertilizers in aeroponics systems. That’s because there’s no root zone media to buffer and hold nutrients. The nutrients have to be properly manufactured so they’ll spray easily and not cause clogs. They have to be manufactured in correct ratios and the proper pH buffering so they provide nutrients that can be immediately absorbed by roots.

Plant science research in many versions of aeroponics gardens has established that Advanced Nutrients Grow, Micro, Bloom is an ideal fertilizer for use in aeroponics mist systems.

That system was modified into a vertical, multi-layered system. Plants were arranged in channels covered with dark plastic film to protect plant roots from light. Seedlings were then inserted in the film at suitable distances apart. More recent units use vertical PVC pipes with strawberry cultivars the usual crop grown. This is similar to an NFT system.

The early promise of aeroponics has been consistently proven. The amazing ability of oxygen to increase plant metabolism, root formation and root efficiency have been well-established.

The Chrysanthemum cuttings rooted over the entire stem surface, and rooting percentage and total root length for Ficus were greater in aeroponics system than in plants from the same stock rooted in perlite/vermiculite or sand/peat/redwood bark mix.

As stated earlier, aeroponics is not as easy or perfect as it sounds. It usually costs a lot to set up, even if you buy a pre-fab system. Learning to run an aeroponics garden is difficult. The gardens depend almost totally on high-pressure pumps, timers and sprayers, so power failure and other malfunctions can spell doom.

Aeroponics systems are far less forgiving than regular hydroponics systems, especially as regards to electricity outages and loss of irrigation schedule. You have to master precise control of nutrients and water in aeroponics systems because there’s no root zone material to buffer solution. If the system has pump failure, bad nutrients, dry reservoir or blocked nozzles, your plants can be horribly damaged or killed in just a few hours.

An interesting modification of the true aeroponics is the Ein Geidi System (EGS). This is a trough system combining aeroponics with the Nutrient Film Technique. Plant roots are immersed in a two-level, circulating, continuously-aerated nutrient solution.

The nutrients are delivered in two layers: a mist on top of a liquid. The solution is injected into the trough by successive laser-cut apertures in a direction opposing that of the solution flow.

This carries oxygen from the spray zone into the nutrient solution, aerating it and providing high oxygen concentrations at the root surface.

Aeration, rate and volume of spray can be customized via controls and a pump and pipe spray system. Roots grow in the spray zone.

The system is fun to watch, but hard to monitor and control. It draws water from the bottom centre of the reservoir through a hollow, rotating impeller driven by an electric motor. The rate of water uptake (2.01/m) is proportional to the rotating speed of the motor (3000 rpm).

The drawn water is thrown horizontally by centrifugal force into the air space above the water reservoir, creating a fine spray of water and, therefore, increasing the water surface area. Then, as the water droplets fall back into the agitated water, gas exchange takes place.

Another type of aeroponics system has a growth chamber half filled with nutrient solution. This type is called an aero-hydroponic system. Mist is delivered via a submersible pump that draws water up a central tube to the top of the root chamber where jets of water hits a curved plate.

Nutrient solution sprays horizontally onto roots. The water returns back into the reservoir to provide gas exchange. It has no extra aeration for the nutrient solution.

An Australian system called “The Schwalbach System” is a commercial aeroponics system developed in Australia. It has a 200 litre nutrient tank feeding a root chamber constructed of black plastic film supported by square galvanized pipe framing.

The growing tops are constructed of 6mm thick structural foam polypropylene which is semi-rigid and resistant to acid and alkaline. It’s UV stabilized and able to handle a wide range of temperatures. The tops are curved to allow rapid rainwater run-off, thus reducing nutrient dilution. The tops also have pockets fitted to allow hoops for an igloo or shadecloth.

Another Aussie innovation is called the Aero-Gro System (AGS). It uses ultra-sonic technology to nebuilise nutrient solution. This mist is much finer than achievable in conventional spray and pump aero systems.

Until the development of AGS, aeroponic systems used a spray to deliver the nutrient solution, rather than a true mist or aerosol. One problem with using high-pressure pump delivery systems is mineral build-up and blocked nozzles, but low pressure sprays don’t deliver rapid nutrient absorption.

Another disadvantage of spraying roots with a nutrient solution is that roots are often washed into a matted tangle by the solution run-off. This stifles root growth and can lead to disease problems if plant roots are not allowed to dry out between spraying sessions.

The AGS solves this problem by vaporizing nutrient solution into a fog-like mist, in much the same way that the application of medication is atomized and delivered to the alveoli in the lungs of asthma patients.

One method of nebulising is to force compressed air through a venturi. This requires jets for the nutrient solution; such jets are easily prone to blockage. Another method uses high-energy, ultra-sonic technology: high frequency sound that blasts nutrient solution into a fog-like mist.

There are many advantages to nebulising the nutrient solution. Nutrients are absorbed more rapidly by roots, which are no longer prone to matting. The nebuliser is solid state. Mechanical breakdowns are virtually eliminated. Power consumption is lower. Maintenance needs are less because irrigation doesn’t require delivery lines and nozzles.

The AGS has a root chamber that contains nutrient solution. The ultra-sonic transducer is imbedded in polystyrene foam floating in the solution. The chamber is aerated. A prime benefit of this float system is that water cools the transducer, which means the water warms up. Nutrients delivered to roots in spray that is in a range of 68 to 75 degrees F are ideally absorbable.

Research shows that plant growth in ultra-sonic systems is superior to those grown in conventional aeroponics.

Aeroponics in all its many forms is a high-tech growing method that requires expertise, investment, monitoring, and quality nutrients such as Advanced Nutrients Grow, Micro, Bloom.

Because aeroponics costs more to set up and run than regular garden methods, it is most appropriate for high value crops.

How to Guard Against the Biggest Aeroponic problems

How to Start Your Own Hydroponics Newsletter