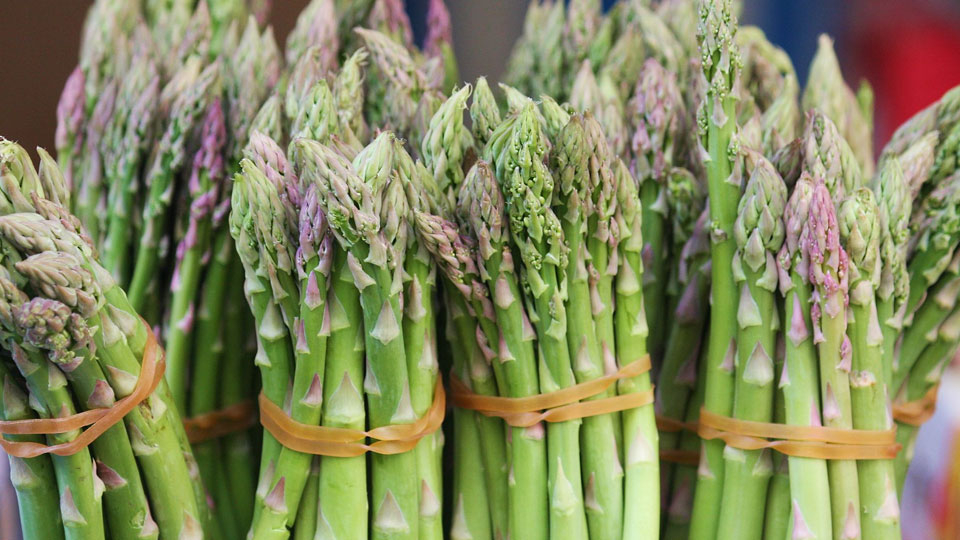 Asparagus is a tasty vegetable that is also a medicinal herb.
It contains significant amounts of vitamins C and A, and has efficacy as a diuretic, blood cleanser, and reproductive hormone stimulant. In some cultures, asparagus is viewed as an aphrodisiac.

Asparagus is native to the Mediterranean and was considered a valuable food by the ancient Greeks. Asparagus is a member of the lily family. It’s related to onions and leeks.

As a grower, you’ll find asparagus to be a hardy perennial requiring close attention during the growing season. It’s one of the first vegetables that become ready for harvest in the spring.

If you properly plan the asparagus section of your garden, you can have decades of asparagus year after year. Be sure not to locate the asparagus patch in low-lying areas that are subject to frost or poor drainage. Asparagus likes full sun and needs porous, well-aerated soil for its dense and extensive root network. Proper preparation for growing anything always involves soil testing. Work small amounts of manure and compost into the soil before planting. Also work into the soil some products by the Advanced Nutrients company: Seafood Buffet, SensiCal Grow, Barricade, and Heavy Harvest Summer. These products will fortify the plants, increase root growth, strengthen plant immune systems, and provide easily available nutrients for immediate growth.

For the first three years after planting, use the same products listed above. Starting in the fourth year, delay the application of these products until June or July, immediately after the last harvest of the season. This allows the plants to store nutrients during dormancy, which will create earlier growth and more bountiful harvests when spring comes to provide warmer weather.

Asparagus can be grown from seed, or by planting crowns that have been purchased or that have been separated from your own existing plants. If you grow from seeds, you will wait a year before your plants are established enough to give you a first harvest. The ideal germination temperature is from 70 to 78 F. It takes 10-12 days before seeds sprout. Many gardeners sow seeds in a production bed and allow them to grow for a year before transplanting. Plant seeds 1/2 inch deep and 2 inches apart in the row. Start them in the spring when the soil temperatures have reached at least 66 F. Young plants create compact buds in the center (crown), with numerous dangling, pencil-sized roots.

The following spring before growth begins, transplant the young plants to their permanent bed. Growing from seeds ensures that you are starting with freshly dug crowns that have not lost vigor by being commercially dug, stored and shipped. Growing from seeds is a bit harder than growing from crowns, and delays harvest a year, but it’s a fantastic way to get a wide variety of asparagus that cannot be bought commercially at grocery stores. Standard asparagus varieties like Mary Washington, Martha Washington and Waltham Washington are available; but a number of new varieties that are either predominantly or all male recently have been introduced to common usage- asparagus plants are dioecious, which means they are naturally male or female.

The female plants bear seeds, which takes away from the yield of female asparagus shoots. That’s why male plants are more valued than female; males produce thicker, larger spears because they put no energy into seeds and do not create seedlings around them. A type of asparagus that produces only male plants has created hybrid varieties such as Jersey Giant, Jersey Knight, Jersey Prince and Viking KBC, which produce larger yields than plants previously known. These newer varieties also have the advantage of being resistant to diseases that attack asparagus, such as Fusarium, rust, and crown rot.

If you are establishing a garden by planting crowns, plant them 4-6 weeks before the expected last frost of the season. Plant 10-20 inches apart in trenches 12-18 inches wide and 7 inches deep (for Jersey series cultivars, plant five inches deep). Spread the roots uniformly with the crown bud side up, in an upright, centered position, slightly higher than the roots. Cover roots with 1 to 2 inches of soil amended as previously specified. You can cover the roots with more soil as the plants grow, because asparagus has a tendency to rise as the plants mature; crowns gradually grow closer to the soil surface. Many gardeners apply more soil between and in the rows in later years.

During the time when asparagus is creating its edible spears, it’s useful to treat them with Advanced Nutrients SensiCal Bloom, Sweet Leaf, and Big Bud. These support flowering and vegetable production and can improve the taste and yield of your plants.

As noted, asparagus plants are dioecious (solely male or solely female). The female plants develop more spears or stems than the male plants, and are often seeded, but the stems are smaller in diameter. With normal open-pollinated varieties, gardeners plant both male and female plants in a ratio of 1:1. After the first year, small red berries form on the female plants in late summer. These then fall to the ground and become new plants that function almost as weeds in the asparagus bed. These can be thinned to keep the bed from becoming unruly, which limits yield. After weather has become freezing in the fall, remove asparagus tops to decrease the possibility that rust could develop on foliage during the winter.

Midsummer mulching with hay, straw, leaves or grass clippings helps control weeds and keep soil from drying out. Because asparagus is a low-growing plant, it is plagued by weeds, and the tactic of mulching, along with careful and constant removal of weeds, is necessary to keep the asparagus from being overgrown.

Problems of spotted and solid-colored asparagus beetles, Fusarium wilt and crown rot are the common plagues that harm asparagus. It is unethical to use chemical fertilizers; progressive gardeners use Advanced Nutrients Bug Away, as well as Scorpion Juice to defeat insect predators or Fusarium and rust. Scorpion Juice is an inoculant that causes plant’s immune systems to grow more vigilant to fight off diseases, viruses, molds and fungi.

Asparagus can be harvested the third year after planting crowns, but for no more than one month the first season. The plant is still expanding its root storage system and excessive removal of spears weakens the plants. During the fourth year and thereafter, the spears may be harvested from their first appearance in the spring through May or June (as long as 8 to 10 weeks).

Harvest spears when they are 5 to 8 inches in length by cutting or snapping them. To cut a spear, run a knife into the soil at the base of the spear and carefully sever it. Because the spear is cut below the point where fiber develops, it becomes necessary to remove the fibrous base from the tender stalk. Cutting may damage some spear tips that have not yet emerged from the ground. Grasp the spear near the base and bend it toward the ground. The spear breaks at the lowest point where it is free of fiber.

Asparagus deteriorates rapidly after harvest. Indeed, all vegetables and fruit are best when consumed fresh. The further away they get from having been connected to their roots and the natural system of sun energy conversion that keeps them growing, the less nutritious they are.

If you must store any variety of asparagus, treat it as you would treat a cut flower. Trim the stems and stand them in a glass with one to two inches of water. Cover with a plastic bag and refrigerate; use them within two to three days.

Asparagus can be eaten raw, steamed, boiled, grilled, roasted or in casseroles and salads. The key to perfectly cooked asparagus, as with almost all vegetables, is to cook as briefly as possible- heat destroys the phytonutrients that make fresh produce nutritious.

The flavor of asparagus is distinctive. The shoots can be garnished with olive oil, lemon juice, salt and pepper. When using asparagus as a salad, always wait until serving time to add the dressing as the high acid content of most dressings will turn the spears yellow. Add fresh chives, savory, thyme, and tarragon to enhance the flavor of cooked asparagus.

There are some features about asparagus growing that are shared among veteran growers: When weather is hot and especially if plants are overprovided with nitrogen, the stalks extend rapidly, which decreases the compactness and density of the shoot. Conversely, if established shoots are exposed to a spring freeze and turn brown or wither, they must be removed from the crown.

With proper planning and amending of the root zone where you intend to plant asparagus, with proper treatment with supplements, and with care to keep the patch weed free during production season, you can grow delicious, nutritious asparagus for a fraction of what you’d pay at the store.

Pretty Soon, You Might Be Able To Grow Vegetables Outdoors In Winter

If You Love Tomatoes, You’ll Love Learning How To Make Them Bigger, Healthier and Tastier

Growing Carrots That People Are Pleased To Eat