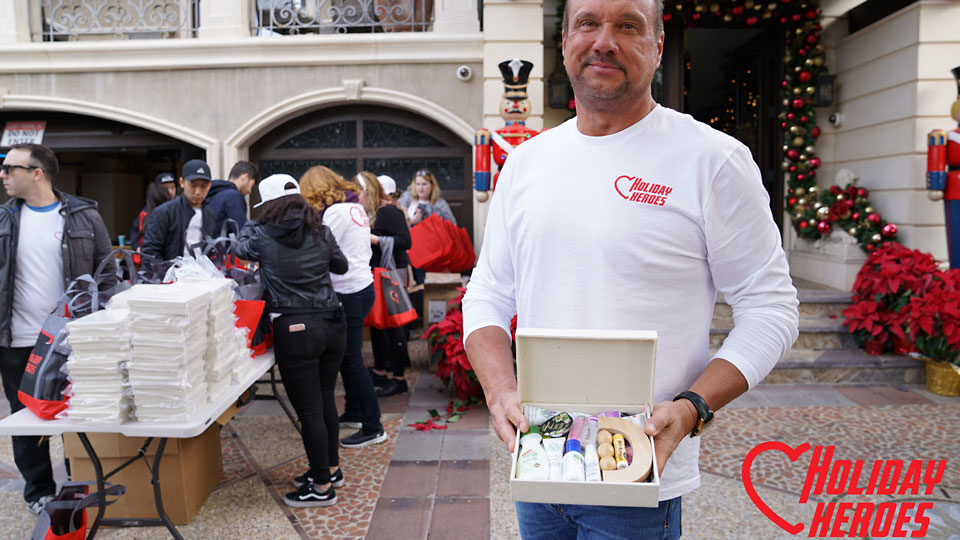 With a look of purposeful determination, BigMike Straumietis strides down a street in Downtown Los Angeles’ notorious neighborhood Skid Row.

Tents line the sidewalk, and rubbish fills the gutter.

The CEO and founder of Advanced Nutrients — the No. 1 hydroponics nutrients company in the world — holds a backpack in each hand, both of which are stuffed full of personal hygiene products, nonperishable snacks and other items that he had personally packed himself just hours earlier.

“Hey, we need some dog food down here, guys,” he tells one of the volunteers, before bending down to knock politely on a zipped-up tent.

“Good evening, anyone in here? We’ve got a package for you.”

A blonde woman sticks her head out: “Yes we’re here.”

Running a hand through her hair, she has been living rough on Skid Row for four years.

BigMike smiles as he holds out the backpack. “Merry Christmas,” he tells her. “Have a good holiday,” as he hands over the goods.

Lana’s face breaks out into a huge smile. “God bless you, thank you so much!” she shouts out — because her benefactor’s towering form is already pounding off down the street to hand over another package to a person in need.

Just hours earlier — on a day when most people in LA are doing the last of their Christmas shopping — BigMike had been watching over a team of 70 volunteers as they stood in a makeshift assembly line set up on the driveway of his multimillion-dollar mansion high in the Hollywood Hills.

Twice a year he opens his home for his Holiday Heroes charity — an outreach program that assembles and gives out packages to organizations in need in Los Angeles and Bulgaria.

As he grabbed a bottle of lotion and helped to stuff toiletries, festive gifts and paint sets into a backpack at this year’s Christmas charity event, BigMike said, “It’s beyond words. I cannot describe to you how it makes you feel. It’s all about the heart and contributing, giving something back to society.”

He knows better than most what it’s like to be down on your luck.

Despite being a successful businessman and philanthropist now, at one point all his worldly possession were stuffed into five black trash bags.

Recalling the time in his life when he struggled to make ends meet, his eyes fill with tears. “I’ve been on food stamps,” he remembers. “I’ve had my entire life in five black garbage bags with absolutely no furniture, stuck living in a cockroach-infested studio hellhole.”

BigMike’s personal experience, and want to serve those in need, is what led to the formation of the Holiday Heroes charity.

“I have been on the opposite side to all this and it is a reason why [Holiday Heroes] is so dear to my heart.”

Indeed, the charity organization is BigMike’s passion project and his way of putting corporate philanthropy into practice by giving back to his community.

He explains of the nonprofit’s inception, “I first started in Bulgaria five years ago, where I helped with handouts to the needy in a country that had no fair or solid structure to assist those who have nothing.”

That Christmas in 2012, when Holiday Heroes launched, BigMike’s charitable contributions and motivation to support the homeless saw to it that 1,000 families were taken care of.

The nonprofit organization continued to grow and expand every year.

In 2015 alone BigMike bolstered more than 10,000 people with aid in Bulgaria. That success led him to start up the organization in Los Angeles in 2016. Now, it also runs Easter and Christmas campaigns in a bid to help alleviate poverty.

And since its commencement, Holiday Heroes has been responsible for feeding over 30,000 people both in LA and the Eastern European nation, and continues to grow.

BigMike was inspired to support the homeless after being confronted by the problems they face.

“I saw down at Skid Row they were having a lot of challenges, and I believe a corporation should give directly back to the community it gets its money from. [Corporations] should give back to a community in general and to people in general.”

The need is more than obvious down on Skid Row, the area that now encompasses 54 city blocks.

It is a tent city of humanity all striving to just get by day to day, and there are now an estimated 11,000 homeless people living in the area of just 0.4 square miles.

Even BigMike was shocked by the numbers, and by the people’s reaction to the Holiday Heroes.

“We brought 1,350 backpacks down there tonight, we could have brought 5000 and not had enough. It’s heartbreaking, but also great to be able to do this.”

The two trucks stuffed full of backpacks were met with a frenzy of desperation as the caravan made its way slowly down the road, desperate people grabbing out for the packages.

But there were also plenty of shoutouts of thanks and smiles of joy.

LaMarcus, who has been on the streets for two-and-a-half years, says, “I can use this stuff for weeks. You have no idea what a difference it makes to us and how they can improve our lives.”

Meanwhile, Latoya, who had run after the Holiday Heroes truck for a block, called her husband and wept tears of joy.

She told him, “Honey, I got us two backpacks — two! This has made my Christmas!”

She then collapsed, weeping on a volunteer: “Thank you from the bottom of my heart. I just pray I can find somewhere to live.”

Byron Takeuchi works with Down But Not Out, an organization that comes every Thursday to feed, clothe, and hand out personal hygiene products to Skid Row’s residents. “The need just can’t be met, it’s kind of ridiculous,” he says. “The drugs, the sexual abuse [suffered by] the women — it’s tough to be a woman on Skid Row.

“There’s mental illness, the drug abuse is tough — people don’t understand. But there are a lot of good people down here.”

The Down But Not Out crew joined forces with Holiday Heroes to hand out the backpacks on Skid Row.

“These packs are great,” Takeuchi continues, referring to the Holiday Heroes backpacks. “You could live off them for a couple of days with the snacks, and the hygiene products are a great idea. There is a huge need [for this].”

As Holiday Heroes has grown, BigMike has managed to convince a number of high-profile global companies to hop on board. “In Bulgaria we have Sony, Unilever, Nestlé, Coke, Pepsi,” he informs, “and other major brands, which support and donate items to the packages. It’s the same thing for the USA.”

BigMike Sees Giving Back As A Corporate Responsibility

As BigMike rolled into Hope Gardens, streams of excited children ran out to greet the trucks, and couldn’t wait to unload the boxes and packages along with the volunteers.

Theresa Thomas, who has been living at Hope Gardens for a year-and-a-half, was delighted with the gifts.

And even more so than usual this year — in early December the shelter had been in danger of going up in flames, surrounded by an inferno as the LA wildfires raged around them. Miraculously, the shelter and all its inhabitants survived.

Thomas recalls, “We were evacuated at 4 a.m. and there was fire all around us.

“It’s amazing to get these packages,” she says, turning her attention to the bags in her arms. “They have a big impact for all of us. Each family and the kids will get a bag. Everything [Holiday Heroes] give us will help us a lot.”

Meanwhile, at the Downtown LA Union Rescue Mission location, volunteers formed a human chain to get the 250 backpacks, each valued at $94, into the shelter.

Rebecca Moeljono, who works with Union Mission, says, “We can use these backpacks for the children. There are also everyday necessities, too. I think they will be really happy. It’s wonderful we will be ready for when the schools start again, and [be able to] use all different kind of things for the mission.”

Holiday Heroes also paid a visit to the LA LGBT Youth Center on Highland in Hollywood, where BigMike and his volunteers handed out 150 totes.

Founded in 1969, the LGBT Youth Center has up to 100 beds and 35 units, and is open 24 hours a day. Each month it receives 42,000 visits from vulnerable people within the community, which stretches the shelter to its limits.

For the LGBT Center, Holiday Heroes dropped off backpacks filled with art supplies, including sketchbooks, pens and paints, which had been specially requested for residents by the center’s staff.

Speaking about the charity, BigMike says, “This is just the Los Angeles chapter, because I live here in this area. [But] the intention is to spread [Holiday Heroes] not just through the United States, but globally as well.

“My company Advanced Nutrients picks up all of the administration and marketing costs involved,” he continues. “I think every company out there should get involved when they can financially afford it.

“The benefits are so many. It goes beyond just giving and seeing those happy faces. It’s great for team building — there are so many positive outcomes. It just makes me so happy and so proud to be a part of this.”

To see our heroes in action, please visit the Humanity Heroes’ website.

Introducing: BudLabs – The hydroponics growing app that makes getting bigger, more consistent yields easier than ever

What To Expect from Advanced Nutrients at CannMed 2022

Boost Your Crop Yields With These Two High-Powered Bloom Boosters